[Transcriber Note: This etext was produced from Weird Tales October 1937. Extensive research did not uncover any evidence that the U.S. copyright on this publication was renewed.]

Chauncey knocked the dottle out of his corncob and briefly startled Old Shep by inquiring unemotionally, “Will you never finish that blasted stick?”

Which in Old Chauncey was tantamount to fury. Words being precious things, both old boys hoarded every syllable; Shep tightened his leathery lips and with the scalpel-point of the knife flicked away a mote of pine. Each link of the chain he was whittling from that interminable stick of soft pine resembled ivory in its satin finish. He might produce one link in a day or let it require a full week. No hurry. The current chain numbered four hundred and seventy-two links. A masterpiece.

Under Shep’s surreptitious scrutiny, Old Chauncey stood erect purposefully and stalked to the woodpile. There a fat log stood on end. With one swift, seemingly effortless stroke of the ax he cleft the log in two, spat explosively and hiked into the house wagging his jaw.

The log-built house, a jewel of conscientious carpentry, stood on the wooded elevation called St. Paul’s Hill, near town. On the side hill one hundred and twenty feet below stood another log-built affair, formerly the ice-house. Since Old Shep had become Chauncey’s permanent guest, this structure had been equipped with furnishings as complete and comfortable as the house, including plumbing. So there was no reason for Shep to hang around Old Chauncey’s kitchen.

The housekeeper, Celia Lilleoden, performed the chores incidental to both houses with such easy efficiency that old Chauncey was repeatedly reminded of his bachelorhood. From continually sunning themselves behind the kitchen like two old snakes the men had acquired a wrinkled black-walnut finish, but Celia still retained the firm, buxom ripeness of an apple.

As a practical communist Old Chauncey kept his latch-key out by inclination. His generosity was limitless.

Thus, Old Shep did not have to ask for anything he wanted. It was share and share alike.

For example, he charged tobacco to Old Chauncey’s account at the store in town. He always had. If he preferred a grade of tobacco superior to what Old Chauncey himself used, such was his privilege. A plug is a plug.

Shep and Chauncey once had occupied the same double desk of raw cherrywood in the schoolhouse which was now a weedy hill of rubble and rotten wood a half-mile out on the backroad.

Besides words, Old Shep hoarded tobacco plugs in case the cause of communism ever collapsed.

In accordance with this scheme of living, Old Chauncey gradually became accustomed to being spared the nuisance of opening the occasional letter he received from another old soldier in Sackett’s Harbor, New York. At first Shep had gone to the trouble of sneaking the mail down to the ice-house and steaming it open. But currently the mail arrived slit open without any subterfuge. The knife, incidentally, was the better of Old Chauncey’s two. Shep had borrowed it, knowing that in communism there can be no Indian giving.

On one occasion Chauncey accosted Old Shep behind the kitchen with a crumpled letter in his fingers.

“Shep,” he suggested casually, “I wish you’d slit my letters open at the top instead of an end. It wouldn’t bunch the writing up so much when you shove it back inside.”

“Chauncey,” Old Shep replied tremblingly, “you’re not serious with me, are you? If you want to keep secrets from your old crony, why, you just tell me seriously not to open those letters any more and I won’t.”

It used to give Chauncey a funny feeling when Old Shep talked like that.

Of a somnolent summer morning while Chauncey was scrubbing his long yellow teeth he glimpsed blurred movement through the starched white bathroom curtain. Tweaking the curtain somewhat aside he witnessed Old Shep scampering down the side hill to the ice-house with a load of kindling in his arms.

“I’ll be dog-goned,” swore Old Chauncey with toothpaste foam dribbling down his chin. “He complains he can’t do his chopping on account of his rheumatism, and look at the old turkey go! I see where I chop kindling for both of us from now on.”

When Old Shep showed up to get in a few licks of whittling before breakfast, Chauncey inquired, “How’s that rheumatism?”

“Well, help yourself to my kindling, Shep. Long as I know where it’s disappearing to, I don’t give a durn.”

“Thanks, Chauncey; thanks! I knew you’d feel that way.”

The bacon, eggs, and delicately crusty fried potatoes hit the palate so ambrosially that, after breakfast, Chauncey was seduced into the disastrous error of mentioning to Shep the chances of marrying Miss Lilleoden: error, for it was only human nature to covet the goods which another man prized most.

Thenceforward Old Shep neglected his whittling or idled awkwardly with it in the kitchen, where a housekeeper spends most of her time. Chauncey observed blackly that Old Shep had a cunning way with him, too.

“Durn it,” Chauncey ruminated dismally, “everything I want, he gets. If I tell him to stay away from her he won’t take me seriously. The old hoodoo always has his way. Anyhow, his durned whittling is out of my sight.”

Befell a morning when Old Shep didn’t appear, and Chauncey found him stretched out stiff half-way down the side hill. In Shep’s vulturine right fist was clenched a small crumple of bills. This pilfering had occurred with such regularity that the companion of Chauncey’s childhood had accumulated just about enough to get started with Celia Lilleoden.

Chauncey asked the coroner, a glistening little round man like a wet dumpling, “Is he dead?”

“He has no kin,” Celia reminded Old Chauncey in her slow, soft contralto.

“I’ll do him one more favor,” Chauncey offered unblinkingly. “He can have my lot in the cemet’ry.”

The lot in Dream Hill Cemetery measured eight feet long, five feet wide and ten feet deep, meaning that it had been excavated and ready for occupancy these past five years. The walls were common brick. On the floor was a stone bed to lie on. Whimsically Chauncey had also installed a small table furnished with a tobacco bag and pipe, matches, an alarm clock with an illuminated dial, and an ashtray. And a thick, plumber’s candle. The old pagan!

Anchored in the foot-wall of this cell, ladder-like, were iron rungs which had enabled him on past occasions to descend and inspect his subterranean property; as, on this occasion, he made the trip to deposit Shep’s unfinished wooden chain.

The stone slab sealing the cell had long been cut with the dangerous advertisement:

HERE LIES CHAUNCEY
D’AUTREVILLE WHOSE WORLDLY
GOODS WERE ANY MAN’S FOR
THE ASKING.

Naturally, a new inscription had to be chiseled.

“But there ain’t any more room in that piece, Chauncey,” the stone-cutter objected. “You want ‘nother stone.”

“Turn it upside down and cut it in the bottom,” Old Chauncey directed. “With that topside staring him in the face, he’ll have something to read in the hereafter.”

The underside, becoming the face, carried the inscription:

HERE LIES SHEPARD
FRANKENFIELD WHO FEELS
NO ANXIETY FOR THE FUTURE
NOR REGRET FOR THE PAST.

On the day preceding Old Shep’s interment, Old Chauncey paid a visit to the nearest justice of the peace with Celia Lilleoden and no one thought it was in the least peculiar. As Chauncey balanced accounts with himself, the state would otherwise inherit his property eventually, as was right, but he wished to insure Celia’s staying on as his housekeeper, in which capacity she beggared superlatives.

While four huskies furnished by the undertaker replaced the granite sheet over the brick chamber, Old Chauncey recollected the particulars of a certain fit of Shep’s, dating about five years before, shortly before Celia. That catalepsy, or whatever it was, had gripped Shep as though in death for nearly three days until Old Chauncey had thought of making a brassy rumpus next to his ear with the big dinner bell. The alarm clock in the subterranean mausoleum was set for eleven o’clock, terminating a like period of time, when Old Shep might be expected to wake up and yawn in the hereafter. Just a whim of Chauncey’s, since the coroner had pronounced Old Shep indisputably defunct.

Late that night Celia surmised worriedly that her absent husband might be visiting the tomb of his lifelong crony, and there he was in the sickly forest of tombstones, hunkering down on Shep’s horizontal tombstone like a boy watching a game of marbles.

But he was listening, not watching. He knocked again on the slab with his bony knuckles, cocked his head. Listening for the response while the lazy breeze lifted his silken gray hair in the starry cave of night, he asked, “Cele, do you hear him down there?”

Celia’s gentle mind recoiled from the idea that the dead might rise in answer to a human summons. The stoically restrained grief for his departed friend must have touched her husband somewhat in the head.

On the fifth night Chauncey observed, “That Old Shep’s ghost must be getting tuckered out.”

Celia decided that there was a limit to indulgence.

“Chauncey,” she ordered firmly, “you mustn’t come down here any more. You’ll be taking pneumonia.”

He accepted the order without protest.

“Maybe that,” he commented to the frankly puzzled Mrs. Old Chauncey, “will teach the old grasshopper when to take a man seriously.” 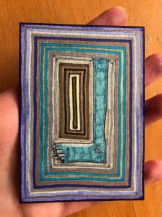 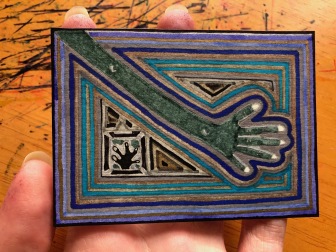 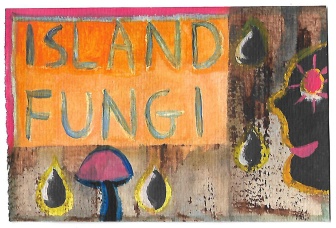 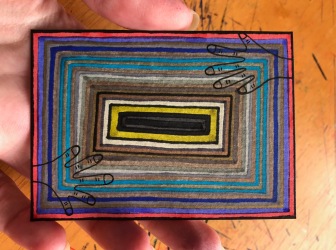 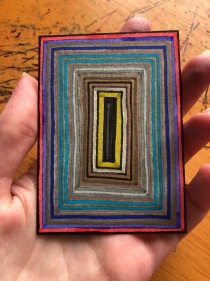 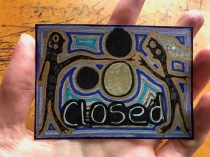 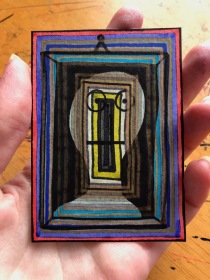 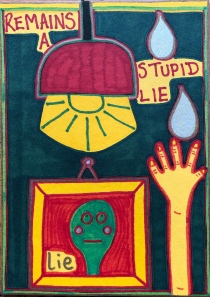