The Shunned House (1924) probably has my favourite opening and my favourite ending of any Lovecraft short story. The ending could even be considered a happy ending by Lovecraft standards and leaves me smiling and not grimacing or despairing! It’s quite a straight-forward horror tale really, a classic haunted-house story, but I enjoy the suspense that builds as we learn the history of the house. The stench in the house emanates out through the pages (or Kindle screen!) and the plaster appears to fall off the walls of your own room as you read.

The Shunned House is a book in the Public Domain and can be shared. I’m going to post the five chapters over the next five days. Here’s Chapter One! Enjoy.

From even the greatest of horrors irony is seldom absent. Sometimes it enters directly into the composition of the events, while sometimes it relates only to their fortuitous position among persons and places. The latter sort is splendidly exemplified by a case in the ancient city of Providence, where in the late forties Edgar Allan Poe used to sojourn often during his unsuccessful wooing of the gifted poetess, Mrs. Whitman. Poe generally stopped at the Mansion House in Benefit Street—the renamed Golden Ball Inn whose roof has sheltered Washington, Jefferson, and Lafayette—and his favourite walk led northward along the same street to Mrs. Whitman’s home and the neighbouring hillside churchyard of St. John’s, whose hidden expanse of eighteenth-century gravestones had for him a peculiar fascination.

Now the irony is this. In this walk, so many times repeated, the world’s greatest master of the terrible and the bizarre was obliged to pass a particular house on the eastern side of the street; a dingy, antiquated structure perched on the abruptly rising side-hill, with a great unkempt yard dating from a time when the region was partly open country. It does not appear that he ever wrote or spoke of it, nor is there any evidence that he even noticed it. And yet that house, to the two persons in possession of certain information, equals or outranks in horror the wildest phantasy of the genius who so often passed it unknowingly, and stands starkly leering as a symbol of all that is unutterably hideous.

The house was—and for that matter still is—of a kind to attract the attention of the curious. Originally a farm or semi-farm building, it followed the average New England colonial lines of the middle eighteenth century—the prosperous peaked-roof sort, with two stories and dormerless attic, and with the Georgian doorway and interior panelling dictated by the progress of taste at that time. It faced south, with one gable end buried to the lower windows in the eastward rising hill, and the other exposed to the foundations toward the street. Its construction, over a century and a half ago, had followed the grading and straightening of the road in that especial vicinity; for Benefit Street—at first called Back Street—was laid out as a lane winding amongst the graveyards of the first settlers, and straightened only when the removal of the bodies to the North Burial Ground made it decently possible to cut through the old family plots.

At the start, the western wall had lain some twenty feet up a precipitous lawn from the roadway; but a widening of the street at about the time of the Revolution sheared off most of the intervening space, exposing the foundations so that a brick basement wall had to be made, giving the deep cellar a street frontage with door and two windows above ground, close to the new line of public travel. When the sidewalk was laid out a century ago the last of the intervening space was removed; and Poe in his walks must have seen only a sheer ascent of dull grey brick flush with the sidewalk and surmounted at a height of ten feet by the antique shingled bulk of the house proper.

The farm-like grounds extended back very deeply up the hill, almost to Wheaton Street. The space south of the house, abutting on Benefit Street, was of course greatly above the existing sidewalk level, forming a terrace bounded by a high bank wall of damp, mossy stone pierced by a steep flight of narrow steps which led inward between canyon-like surfaces to the upper region of mangy lawn, rheumy brick walls, and neglected gardens whose dismantled cement urns, rusted kettles fallen from tripods of knotty sticks, and similar paraphernalia set off the weather-beaten front door with its broken fanlight, rotting Ionic pilasters, and wormy triangular pediment.

What I heard in my youth about the shunned house was merely that people died there in alarmingly great numbers. That, I was told, was why the original owners had moved out some twenty years after building the place. It was plainly unhealthy, perhaps because of the dampness and fungous growth in the cellar, the general sickish smell, the draughts of the hallways, or the quality of the well and pump water. These things were bad enough, and these were all that gained belief among the persons whom I knew. Only the notebooks of my antiquarian uncle, Dr. Elihu Whipple, revealed to me at length the darker, vaguer surmises which formed an undercurrent of folklore among old-time servants and humble folk; surmises which never travelled far, and which were largely forgotten when Providence grew to be a metropolis with a shifting modern population.

The general fact is, that the house was never regarded by the solid part of the community as in any real sense “haunted”. There were no widespread tales of rattling chains, cold currents of air, extinguished lights, or faces at the window. Extremists sometimes said the house was “unlucky”, but that is as far as even they went. What was really beyond dispute is that a frightful proportion of persons died there; or more accurately, had died there, since after some peculiar happenings over sixty years ago the building had become deserted through the sheer impossibility of renting it. These persons were not all cut off suddenly by any one cause; rather did it seem that their vitality was insidiously sapped, so that each one died the sooner from whatever tendency to weakness he may have naturally had. And those who did not die displayed in varying degree a type of anaemia or consumption, and sometimes a decline of the mental faculties, which spoke ill for the salubriousness of the building. Neighbouring houses, it must be added, seemed entirely free from the noxious quality.

This much I knew before my insistent questioning led my uncle to shew me the notes which finally embarked us both on our hideous investigation. In my childhood the shunned house was vacant, with barren, gnarled, and terrible old trees, long, queerly pale grass, and nightmarishly misshapen weeds in the high terraced yard where birds never lingered. We boys used to overrun the place, and I can still recall my youthful terror not only at the morbid strangeness of this sinister vegetation, but at the eldritch atmosphere and odour of the dilapidated house, whose unlocked front door was often entered in quest of shudders. The small-paned windows were largely broken, and a nameless air of desolation hung round the precarious panelling, shaky interior shutters, peeling wall-paper, falling plaster, rickety staircases, and such fragments of battered furniture as still remained. The dust and cobwebs added their touch of the fearful; and brave indeed was the boy who would voluntarily ascend the ladder to the attic, a vast raftered length lighted only by small blinking windows in the gable ends, and filled with a massed wreckage of chests, chairs, and spinning-wheels which infinite years of deposit had shrouded and festooned into monstrous and hellish shapes.

But after all, the attic was not the most terrible part of the house. It was the dank, humid cellar which somehow exerted the strongest repulsion on us, even though it was wholly above ground on the street side, with only a thin door and window-pierced brick wall to separate it from the busy sidewalk. We scarcely knew whether to haunt it in spectral fascination, or to shun it for the sake of our souls and our sanity. For one thing, the bad odour of the house was strongest there; and for another thing, we did not like the white fungous growths which occasionally sprang up in rainy summer weather from the hard earth floor. Those fungi, grotesquely like the vegetation in the yard outside, were truly horrible in their outlines; detestable parodies of toadstools and Indian pipes, whose like we had never seen in any other situation. They rotted quickly, and at one stage became slightly phosphorescent; so that nocturnal passers-by sometimes spoke of witch-fires glowing behind the broken panes of the foetor-spreading windows.

We never—even in our wildest Hallowe’en moods—visited this cellar by night, but in some of our daytime visits could detect the phosphorescence, especially when the day was dark and wet. There was also a subtler thing we often thought we detected—a very strange thing which was, however, merely suggestive at most. I refer to a sort of cloudy whitish pattern on the dirt floor—a vague, shifting deposit of mould or nitre which we sometimes thought we could trace amidst the sparse fungous growths near the huge fireplace of the basement kitchen. Once in a while it struck us that this patch bore an uncanny resemblance to a doubled-up human figure, though generally no such kinship existed, and often there was no whitish deposit whatever. On a certain rainy afternoon when this illusion seemed phenomenally strong, and when, in addition, I had fancied I glimpsed a kind of thin, yellowish, shimmering exhalation rising from the nitrous pattern toward the yawning fireplace, I spoke to my uncle about the matter. He smiled at this odd conceit, but it seemed that his smile was tinged with reminiscence. Later I heard that a similar notion entered into some of the wild ancient tales of the common folk—a notion likewise alluding to ghoulish, wolfish shapes taken by smoke from the great chimney, and queer contours assumed by certain of the sinuous tree-roots that thrust their way into the cellar through the loose foundation-stones. 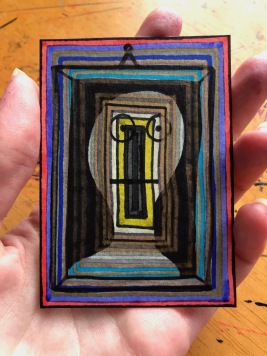 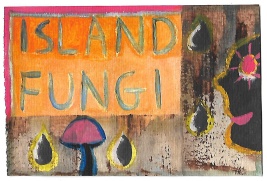 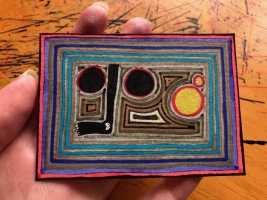 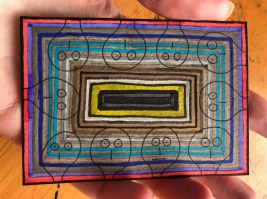 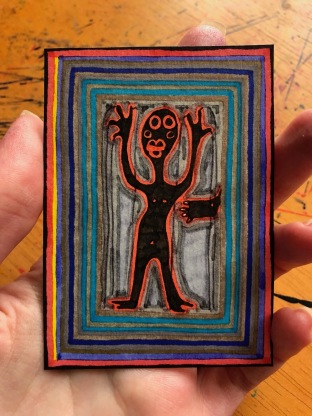